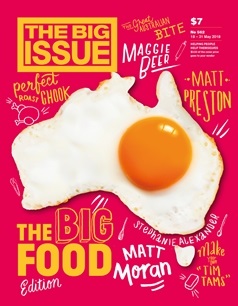 In May 2018 I was commissioned by The Big Issue to write the following introductory article for their food issue.

The taste of home

Forty years ago, in the depths of a Kalgoorlie goldmine, I found myself talking about Cornish pasties. The retired miner leading our tour hailed from Cornwall, as did my father’s forebears. “In my youth I ate home-made pasties every Saturday for lunch,” I told him. He nodded with satisfaction. “My wife can’t boil water,” he said, “but she does make a good Cornish pasty.”

The Cornish miners who flocked to the South Australian copper mines in the 1840s, and later to the gold fields of Victoria and Western Australia, brought their culinary traditions with them. For them, the pasty was the taste of home. It’s a story that has been repeated many times, as successive waves of immigrants transformed what we think of as Australian food.

Of course the first human beings to set foot upon this continent probably brought very little with them. Dreamtime stories of many Aboriginal nations support the accepted theory that their ancestors crossed the sea in canoes and first arrived on our northern coast. They found a continent rich in game. These were the megafauna – hippopotamus-sized wombats, giant kangaroos, fearsome land-living crocodiles and marsupial lions.

These first Australians undoubtedly hunted and ate many of the huge beasts they found here. Archaeologists have the evidence – bones showing tool marks. These creatures didn’t disappear from the menu for some 30,000 years after humans colonised the continent. Were they hunted to extinction? That’s still a subject of debate.

Over millennia, Australian foodways evolved. Although they never developed a system of settled agriculture, Aboriginal people used methods including fire, grain harvesting and storage, fish and eel traps and even some planting to ensure the continuity of their food supply. Grinding stones found in north western New South Wales suggest that 36,000 years ago local people were grinding grass seeds, probably millet, to make a kind of flour. Mixed with water this could be roasted to make a form of bread – the oldest evidence of bread making in the world.

For Aboriginal people, home was where the food was. If the food supply in one area was exhausted, they simply moved on. In this way they could adapt to a challenging continent, enjoying a varied, all-Australian diet for thousands upon thousands of years. Then everything changed.

From salt beef to mutton chops

In 1788, British convicts and their gaolers came ashore in Port Jackson with stocks of white flour, salt meat, dried peas, butter and rice. They also had livestock, including two bulls and five cows which, before long, absconded from their paddock while their keepers were enjoying a rum-fuelled celebration of the King’s birthday.

It was a loss the struggling settlement could ill afford. Those early years were lean indeed. In Sydney Town and later in Van Diemen’s Land, convicts and soldiers alike relied on fish, oysters and native animals and fruits to supplement their meagre diets. But by 1813, both colonies had become self-supporting. And in that year an expedition led by William Wentworth, Gregory Blaxland and William Lawson crossed the Blue Mountains west of Sydney, opening the way to fresh pastures.

So began the age of the sheep, and for more than 100 years the national dish of Australia could surely be said to be the mutton chop. Free settlers (ideally from ‘home’, as Britain was still regarded) were lured by the promise of land grants and ‘meat three times a day’. Meat, tea and bread became the staples for these early colonists. In the bush the bread was often damper: flour, salt and water scraped together on any relatively clean flat surface and baked in the ashes of the fire.

The next wave of immigrants was lured not by land, but by gold. And although most of the fortune-seekers of the 1850s gold rushes came from England, Scotland or Ireland, more than 42,000 hailed from China. However, it seems these new arrivals kept their distinctive cuisine very much to themselves. Even the Chinese cook-houses that sprang up on the goldfields principally offered English-style food. In 1854 the first documented Chinese restaurant in Australia, established by John Alloo at Ballarat, advertised “Soups always ready”. His menu also included plum puddings, jam tarts, and roasted and boiled joints.

Nonetheless, these Chinese immigrants played a significant role in our food history. When the alluvial gold petered out many planted market gardens and for decades Chinese hawkers supplied Australian towns and cities with fresh vegetables. No bok choy or gai lan however. They grew what would sell: peas and cabbages, cauliflowers and lettuces.

In Queensland, new gold fields attracted further waves of Chinese immigrants who later turned their hand to horticulture. As early as the 1860s, Chinese immigrants were growing peanuts in North Queensland. Commercial peanut farming began in 1901 when Samuel Long planted three acres (1.2 hectares) in the Kingaroy district. It was the Chinese who brought the first banana plants to Australia in the mid-19th century and, by the early 1900s, Chinese traders controlled over half the banana trade in Sydney and Melbourne.

Until the second half of the 19th century most food was, necessarily, fresh. Preserving techniques were chiefly salting and pickling; ice was a luxurious commodity cut from North American lakes and imported by sailing ships. Then, in 1851 in Geelong, James Harrison produced the world’s first ice-making plant. He patented the process in 1855 and, this being Australia, promptly sold the first commercial model to a brewery.

Along with refrigeration came canning. In the 1840s and ‘50s Australia saw some early experiments using bulky tin plate soldered together by hand. In the 1860s, the Australian Meat Company began canning mutton in New South Wales, Thomas Peacock began canning fruit in Tasmania and, a decade later, an enterprising Queenslander named Brainard Skinner was putting out a nice line in turtle soup as well as his famous dugong paté.

Rabbits, introduced to Australia in the 1850s and soon found in plague proportions, also made their way into cans. The technology was less than perfect, as passengers aboard the steamer Aconcagua learned to their cost. On a voyage through the Red Sea in 1878, 20,000 cans of rabbit meat bound for Britain exploded in the heat, creating a less-than-pleasant ambience for the remainder of the journey.

In the last three decades of the 19th century, more and more food products emerged, not from farms but from factories. Arnott’s, MacRobertson’s, Henry Jones IXL, Leggo’s, Rosella and Sanitarium are just some of the iconic brands that made their way into Australian pantries in this period.

Confectionery manufacturers like MacRobertson’s (the originators of Cherry Ripe, Freddo Frogs and other popular treats) benefited from the increased availability of cheaper Australian-grown sugar. And once sugar became a staple, not a luxury, we entered what food historian Michael Symons called a ‘golden age of Antipodean baking’. The early 20th century gave us the lamington, the neenish tart, the Anzac biscuit and, in the 1930s, the pavlova.

Through the years of World War I, the Great Depression and even during the food rationing that accompanied World War II, the taste of home was often a fresh-baked cake.  In some Australian cookbooks of this period more than half the recipes are for baked goods, many incorporating locally popular ingredients such as passionfruit, pineapple and coconut.

Towards a multi-cultural cuisine

World War II and its aftermath revolutionised the way Australians ate. American servicemen left us with an increasing appetite for hamburgers, hotdogs, doughnuts, and dishes that combined fruit (especially pineapple) with ham. A more long-lasting influence was the influx of ‘new Australians’ from a devastated Europe. Horrified by the food they found in the migrant camps, they sought out their own communities, where cafés and delicatessens could supply the flavoursome sauces, cured meats, olive oil and coffee of their homelands.

Tentatively, ‘old Australians’ began to experiment with these challenging ingredients. The Australian Women’s Weekly published its first recipe for ‘Spaghetti Bolognaise’ in 1952 – a strange baked version that included Worcestershire sauce. When Toto’s Pizza restaurant opened in Melbourne’s Lygon Street in 1961, people crossed town to sample this exciting new delicacy. The increasing affordability of overseas air travel also meant a new generation of travellers returned to Australia wanting to recreate the food experiences they’d had in Europe.

In 1966, Prime Minister Harold Holt’s government effectively dismantled the infamous White Australia Policy, establishing legal equality between British, European and non-European migrants to Australia. This set the scene for increasing diversity in our community and in the way we ate, although the home cook’s initial experiments with Asian food generally involved a packet of chicken noodle soup and a lot of chopped cabbage.

Today, the supermarkets that long-ago replaced the friendly corner grocery store offer ingredients for Indian, Italian, Mexican, Japanese or any one of dozens of different cuisines. Despite this, the number one home-cooked dish for most Australian families is still ‘meat and three veg’. But stir fries and spaghetti Bolognese are close behind. We’re learning. Yes, we’re learning.