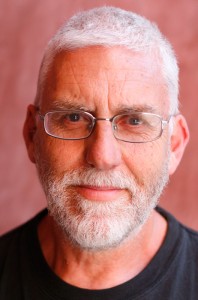 Background: Born in Melbourne in 1947, I grew up however as a country boy. My mother and engineer father moved to a butter factory at Walwa on the Victorian side of the Murray River, rode my bike to State School in NSW and took the school bus to high school in Corryong. I was always a ‘photographer’, I started the school Camera Club, so when I was accepted into Photography School, my parents moved to Melbourne with my brother and sister. I graduated from the Advertising and Illustrative Photography course at RMIT University majoring in photo-journalism. My final year folio was a 16mm documentary on disabled kids putting on a concert in 1967. I started work as an independent stills photographer in late 1960’s, then got seduced into advertising (I was broke) in 1969 ending as a television producer at Clemenger-BBDO Melbourne.

I helped start the Melbourne Filmmakers Co-op, working as ‘the manager’. I joined the board of Open Channel in its push to be the Melbourne community TV channel. In my ‘spare’ time, I became the Technical Editor and industry writer for Cinema Papers magazine for twelve years. I’ve worked in production on TV series and features, special effects and computer video graphics. I owned one of the early desktop graphic systems (Innovion) that I used for special effects tests. I swapped writing for Cinema Papers magazine to become Editor of Australian MultiMedia Magazine for a small Melbourne publisher and revamped the magazine to make it more like WIRED which had just launched. After two issues it was bought by Matt Handbury of Murdoch Magazines who moved me and the editorial team to Sydney. It was clearly ahead of its time but very exciting and inevitably closed, but I stayed on as Murdoch Magazines web consultant to their many publications. (There’s an older html website backstage with some of that early stuff here. ) A 2005 artifact! Some links even still work.

I moved with my wife Jan and our family to Bungendore (outside of Canberra)  when she took the position of Creative Director at Grey Canberra in 1995.

April 1996  From my front room in rural NSW, I started a web company called Digital Mechanics with a Sydney partner Doug Bailey, doing corporate web sites for P&O Cruises and Medibank Private. I was also writing regular, mostly new technology material, for The Weekend Australian, for Cinema Papers and others. It seemed like a perfect life, big country house, web writing, veggies, and all on a 28k modem.

1998 – 2002 I started Grey Interactive Canberra. This grew to managing twelve full time staff, doing internet and intranet work for Government agencies, local business and ACT government. I then left it (wasn’t having fun anymore being a ‘boss’) worked for two years as an in-house Project Manager to rebuild P&O Cruises international website as a multimedia  e-commerce site. That mean’t driving three hours each way to Sydney twice a week for meetings.

2002 – 2004 I was asked back to Grey Interactive to help them ‘re-organise’ for three months, which became two years as again their Multimedia manager and Executive Producer.

July 2004 – Feb 2005 Always a member of Slow Food and supporting small producers, Jan, Mark Kelly and I produced two issues of a magazine about food and travel called Regional Food Australia. It was then sold to a Sydney publisher.

May 2005 – June 2007 I went off and worked for the National Food Industry Strategy Ltd. I worked as a communications officer, as writer for their industry magazine, and as web master for the NFIS websites. I helped organize a two day regional food conference in Melbourne, with local producers and food groups like Food SA. I wrote and visited and photographed their Export to India and Export to Dubai web sites. I assembled the NFIS legacy website of interactive material for small food producers when the Government dropped funding.

June –August 2007 Worked on a short contract (the only time I’ve been a Government employee) with the Department of Agriculture Fisheries and Forestry to transfer the NFIS image libraries and documents material to their database system.

In December 2007 We bought the Regional Food Magazine publication back, I went back to write, photograph and edit another issue of and work on a new Regional Food website, www.regionalfood.com.au. The print magazine was re-launched in March 2008. unfortunately it still didn’t reach ‘critical mass’ of support and we had put a lot of the house into it, so stopped after that issue. There’s online copies here. It did and still looks pretty.

2010 April – June Traveled to UK and USA for a documentary project on getting young people involved in small scale agriculture, called Growing the Growers (that’s the YouTube promo). It was optioned by Ronin Films for non-theatrical release, but we couldn’t raise funds to complete it, and kept shifting

2010 July-August  was spent again organizing the second year of the Truffle Festival which was growing each year. Received Event Assistance funding from the ACT government.

2011 – 2014  The ACT Event Funding allowed the Truffle Festival to grow significantly in 2011 and 2012, with advertising campaigns in the Sydney Morning Herald and Canberra Times bringing visitors to the region’s restaurants and accommodation. It became an almost full time job to run. There was so much extra work generated that we needed  a full-time manager for 2013. It has become a major feature of the Capital Region seasonal event calendar and I’m proud of that. That  let me ‘escape’  and return doing researching, editing, writing, and managing website content for amongst others the Australian Truffle Growers Association (ATGA) moving to Melbourne in 2014

2015-16  With funding from RIRDC (Rural Industries Research and Development Corporation) now AgriFutures Australia, over twelve months I created their WIKI for new Truffle growers  – It’s an ATGA Members only offering but there’s a sample page here.

2016-17 I continued working on food and wine videos for YouTube and Vimeo channels and completed picture research and acquisition and some original images for my wife Jan O’Connell’s book, A Timeline of Australian Food: From Mutton to Masterchef .

2018 Jan and I are currently working on another food related corporate history project, and I’m looking at my archives wondering what or who will be interested in all that film and food history.

There’s a tentative start at assembling what is important (at this moment) with this website whileIremember.it.